Kejuan Brooks was always athletic, but Operation Progress opened his eyes to the larger world.

The 12-year-old was already excelling in football, playing offense, defense and special teams for the Watts Bears, when Officer Grant Goosby challenged him to try something more. Instead of just focusing on football, Kejuan joined OP and began pushing himself academically.

“They’re really strict about grades,” Kejuan said. “They push you to do well in school and they reward you when you do. I’ve learned that all your grades count, so you need to study for every test.  And I’ve learned to be respectful.”

He’s been in the program three years now, avoiding trouble on the streets of Watts and focusing on his studies at St. Lawrence of Brindisi. By minding his manners and his schoolwork, he aspires to a better future.

“I’m planning on going to college,” Kejuan said. “I don’t know what career yet, but I’d never thought about any of that before I was in OP.” 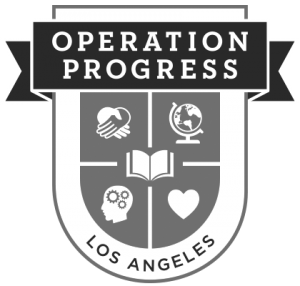