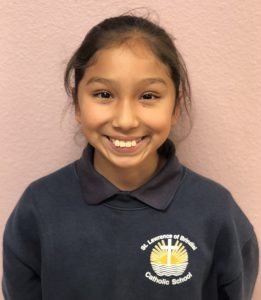 When asking Meryland what she likes to do for fun, she talks about her family. She loves to play with her 3-year-old sister, “Instead of me making her laugh, she makes me laugh.” She helps her mom cook and make rice, mole, and soup. She poses for her older sister’s drawings and encourages her to improve her skills. They all go to the mall, go out to eat, and watch movies together. From having just one conversation with Meryland, you know she comes from a tight-knit family that support each other and advocates for each other’s dreams.

Meryland’s dreams are not ones you’ll usually hear from a 6th grader, though.

“I want to be like Gennady Golovkin Triple G,” Meryland says with a huge smile on her face. “From the first step [into the boxing gym], I knew I had to learn the basics because I wanted to become good at it.”

Meryland is a boxer. A pretty serious one, too. Nearly every day of the week you’ll find her at the boxing gym after school, shaping up her moves for her next fight. She is usually the only girl her age there. She’s been to out-of-state competitions in Kansas and New Mexico. Boxing has become a huge part of her life.

“Sometimes it’s hard because you have to sacrifice a lot, but it’s actually worth it because when you win…” Meryland pauses for a second and looks up with excitement in her eyes, “it’s an emotion you can’t explain.”

Meryland started boxing when she was 6 years old but stopped for a while due to health issues. Her dad was hesitant when she expressed interest again in this intense contact sport, but eventually came around because Meryland kept asking to go back. Now 12 years old, Meryland started up again a little over a year ago. Dad is very supportive. “My mom and dad wake up at 3 A.M. to go to work but my dad doesn’t stop taking me to boxing,” Meryland says, “He comes home tired but he helps me pursue my dreams.”

Her Operation Progress mentor, Officer Salcido, is also very supportive. He took her to the competition in Kansas back in January and helps her with her training. He has even started to box himself. “I inspired him to do it,” Meryland giggles, “I didn’t think he was going to box, but he did! And now I have a mentor that’s a boxer, well, at least he’s getting there.”

When asking how Operation Progress has helped her reach her goals, she first talks about how OP bought her boxing shorts and the boxing program she attends. When she takes a second to think about it though, boxing aside, Meryland says,

“[OP] helps me not only focus on my sports but on my grades too. I want people to recognize me as a girl that boxes but that also has really good grades. They help me with that.”

Meryland received 3rd honors this past semester, one of only two in her class that received that prestigious title. “I’ve the highest grades in my class now,” she says proudly. We’re proud of her.