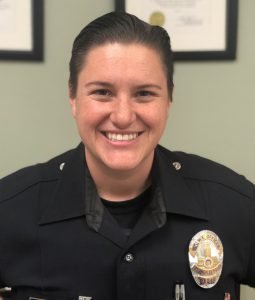 Officer Navarro became a mentor 2 years ago when another Operation Progress mentor recommended the program, thinking she’d be a great fit. When asking Navarro why she decided to become a mentor, she reminisced about her time in the Marine Corps, “I saw that the world is so big and is so much more than what you see right around you, so I just wanted to open that door for the kids– to new experiences, new ways of life, to share some of that with them and also provide a good stable mentor in their life. It’s important.”

Growing up with her dad as an LAPD officer, Navarro realized the impact his positive choices made on her life. “One person that made one decision to go a positive way created an enormous ripple effect” that impacted her life immensely. This is one of the many reasons Officer Navarro became an LAPD officer herself. She thought it was a good way to give back and “help some people start ripples in their own lives.”

Recently, Officer Navarro took her 3 mentees –Angel, Carla, and Jalyn– to Knotts Berry Farm for a fun-filled day of hanging out and riding roller coasters. “Sometimes I feel like a kid myself, so I still enjoy doing those kind of things,” Officer Navarro mentions, with a smile on her face, when talking about the way she likes to mentor. “Being a mentor is something that I’ve had to work my way into,” Navarro said, “it was hard in the beginning, but now I think I’ve got a good little flow.”

She pops in at school and at home weekly, checks their grades frequently, has a good reward system in place, and makes it clear to her mentees that they can rely on her anytime, anywhere. She wants to be a reliable and positive force in their lives that is there to help them. She also likes bringing her baby, Jack, to hang out with her mentees to show them that they are just as much apart of her life as she is of theirs.

What’s next? Go-karting and guitar playing. Go-karting is just for fun, and Angel has been asking to go for a while, but Officer Navarro hopes to start a guitar class at Operation Progress sometime in the near future. Her mentee, Jalyn, serves as the inspiration for this idea as she loves to sing and play guitar. Officer Navarro sees music as an essential learning device. She said that learning music was helpful for her, especially when it came to tough subjects like math.

When asked what she thinks about the OP program, Officer Navarro said, “Of all the things I’ve seen from this [LAPD] department, this is the thing I’ve seen that is really impactful. These kids are going to 4-year schools. They are going to college. It’s going to change their lives and there’s no question about it. We all do a lot of things and we hope it helps. There’s no hope factor in Operation Progress. It helps. It’s measurable. It’s making a difference. Period.”

Thank you Officer Navarro for everything you do for Operation Progress!